So here goes with my Comrades 2022 preparation update...

I always do the Midrand Striders 60km which is normally  6 weeks before Comrades..

As I also racewalk and invariably AGN decide to have a Grand Prix the day before the 60km, I have no idea why or who is trying to block me.....  This year with a new CGA Racewalking commission   so they decided to make the AGN event a qualifier for the CGA team for Provincials.. No ways I can miss a qualifier so I entered..

I use Maxed shoes for 10km RW and they are really a size short.. hence only using them for 10km.. I normally am quite good at cutting my toe nails... but I forgot about the smaller shoes.  I wanted to do a sub 67mnin 10km and kept very consistent and finished in 66:25 so was very happy, finished first in Age group so overall very happy. Chatted a bit with friends then started walking to the car..   I could not believe how sore my toes felt.. Got back to the car and the smallest 3 toes on each foot were quite bloody.. sorry no pics. 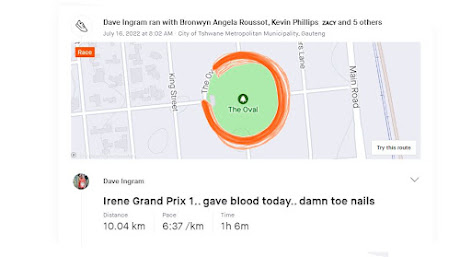 I did trim my nails when I got home!!!  But wearing my Brooks Adrenaline ( Comrades shoes) meant I had more space for my toes. Overall this was not great preparation for the 60km, which started at 6 am , in the dark. My goal was to get as close to 7:30/km and try as much as I could  to keep it there, after about 12 km I was pretty much on target but that's about when my feet started complaining. I felt like I had stones in shoes, under the soles, normally I  sort of kick the ground and move the stones to the front  of the shoes. This did not work as my toes were so sore and then every time I went uphill the stones used gravity  to irritate me once more.. The 60km is an out and back so I tried to take my mind off my feet by trying to guess when I would see who coming back. I normally carry minimum Norflex so that I do not take unless I really need to. I had decided I would take my lone Norflex at Halfway..  Seeing Liz at about 28km , when she asked if I had Norflex  I knew I would not be getting one, she looked finished  so I gave her mine..( I was worried about her, she to was worried as she told me later I was limping a bit.. probably from the toes)  Turning at 30km with the new route I had in my mind thought we would not be going down the sand road towards Diepsloot..I was wrong we went pretty much as far down as the sand did. Had a snack and back up... eish..I felt finished, ,pace had dropped to 7:45/km and interestingly my Average HR which was pretty much 138 most of the first half had dropped to about 128  when I checked it at about 33km. I normally only look  at HR after the event..

I decided to just see if I could finish but the suggested cut off is 8:00/km and as i got above that and my HR got below 118 I realised I was not going to do the full 60 and decided to take a short cut which would take about 7km off the route. I was really struggling along at over 11:00 /km at times but mostly managed to stay with those who were essentially about an hour ahead of me. Looking at the profile below its easy to see  why the pace was so slow near the end. The hills are monstrous.. 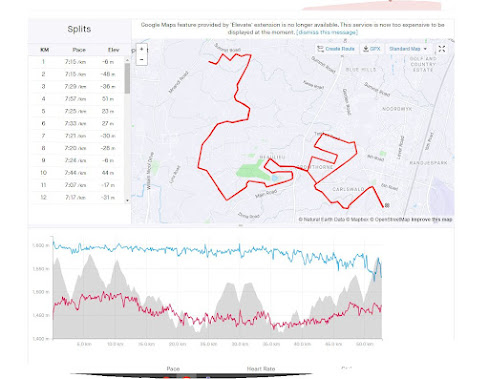 When I go to the end I was expecting Liz to be there but no.. so I went to the car and low and behold my Cellphone which I left on Airplane mode was flat. So I decided to go look for Liz, A quick stop for diesel while keeping an eye on the road and I found her literally 300m down the road. I then went and got some Alcohol free beers - not a pretty sight walking to the bottle store and joined up with Liz...
Caught up with some ex club mates at Midrand striders. Boy were my feet sore.
No walking till Thursday and feet at fine..
Currently my goal for 5 weeks time is 7:41 /km which will give me a Down walk PB... 11:40:10 is my current pb... Interestingly by making the distance distance 91 not 90 drop the required pace by 5 secs /km. Distance is 90.8km this year

Posted by Daveawalker at 7:11 AM